Why are there hairs on my chicken wings?

Here at Wingmaster, we sometimes hear this from customers: “There’s a hair on my chicken wing! Where did this come from?”

We want to create a positive experience for our guests at Wingmaster. If there was a human hair on your food, that would be a big deal — and we’d address it immediately by replacing your order. However, 99% of the time these hairs are a natural part of the chicken, called the ‘filament’. Finding them occasionally is totally normal and not a big deal.

Usually, when someone complains it’s because they typically eat frozen wings from the supermarket. What they don’t realize is that finding ‘filament’ is part of the authentic wing-eating experience — but not everyone understands this. That’s why we’re writing a blog: to set the record straight about hair on chicken wings, once and for all. So allow me to explain…

What is a filament? A filament is defined as “a slender threadlike object or fiber, especially one found in animal or plant structures”. In chickens, the filament is the part of the feather that connects it to the skin of the chicken.

As we mentioned above, the filament is a natural part of the chicken that is occasionally left behind after thefeathers are removed. When a chicken comes into the butcher’s, it will be plucked and cleaned by machine before it is turned into chicken wings and sent to us at Wingmaster.

These filaments are totally sanitary and have been thoroughly cleaned, along with the rest of the wing. There is absolutely no health risk associated with them — and you will only find them on rare occasions, usually on wingettes. They are so small, it is very difficult to see them, even if you are looking closely.

It would be almost impossible to remove every filament on each chicken wing. The Wingmaster team will pull out as many filaments as we can find before cooking them—but we can’t catch all of them!

As we mentioned above, most people dislike filaments because they are used to eating frozen chicken wings, from the supermarket. You will only find filaments on fresh chicken wings! They are entirely flavorless and so small that you won’t notice them when you take a bite.

So the next time you spot a hair on your chicken wings, check if it’s attached to the skin. If it is, then don’t worry — it’s just a filament. Keep enjoying your wings!

We're not around right now. But you can send us an email and we'll get back to you, asap. 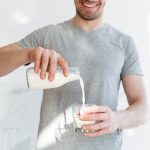